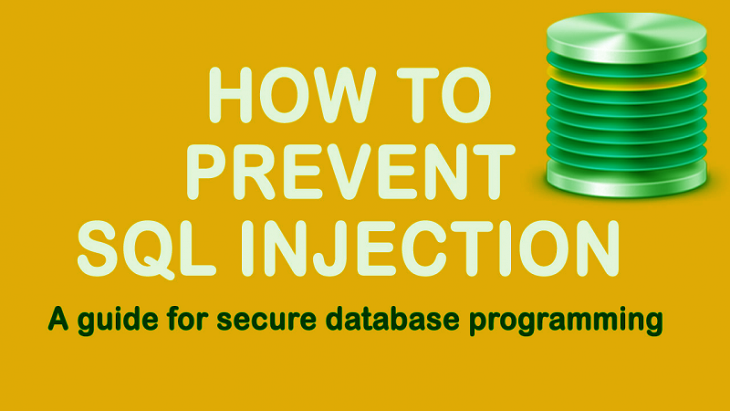 What is SQL Injection ?

SQL Injection attacks are unfortunately very common, and this is due to two factors:

It’s somewhat shameful that there are so many successful SQL Injection attacks occurring, because it is EXTREMELY simple to avoid SQL Injection vulnerabilities in your code.

The use of prepared statements with variable binding (aka parameterized queries) is how all developers should first be taught how to write database queries. They are simple to write, and easier to understand than dynamic queries. Parameterized queries force the developer to first define all the SQL code, and then pass in each parameter to the query later. This coding style allows the database to distinguish between code and data, regardless of what user input is supplied.

Prepared statements ensure that an attacker is not able to change the intent of a query, even if SQL commands are inserted by an attacker. In the safe example below, if an attacker were to enter the userID of tom’ or ‘1’=’1, the parameterized query would not be vulnerable and would instead look for a username which literally matched the entire string tom’ or ‘1’=’1.

In rare circumstances, prepared statements can harm performance. When confronted with this situation, it is best to either a) strongly validate all data or b) escape all user supplied input using an escaping routine specific to your database vendor as described below, rather than using a prepared statement.

The following code example uses a PreparedStatement, Java’s implementation of a parameterized query, to execute the same database query.

With .NET, it’s even more straightforward. The creation and execution of the query doesn’t change. All you have to do is simply pass the parameters to the query using the Parameters.Add() call as shown here.

We have shown examples in Java and .NET but practically all other languages, including Cold Fusion, and Classic ASP, support parameterized query interfaces. Even SQL abstraction layers, like the Hibernate Query Language (HQL) have the same type of injection problems (which we call HQL Injection). HQL supports parameterized queries as well, so we can avoid this problem:

For examples of parameterized queries in other languages, including Ruby, PHP, Cold Fusion, and Perl, see the Query Parameterization Cheat Sheet

Developers tend to like the Prepared Statement approach because all the SQL code stays within the application. This makes your application relatively database independent.

Stored procedures are not always safe from SQL injection. However, certain standard stored procedure programming constructs have the same effect as the use of parameterized queries when implemented safely* which is the norm for most stored procedure languages. They require the developer to just build SQL statements with parameters which are automatically parameterized unless the developer does something largely out of the norm. The difference between prepared statements and stored procedures is that the SQL code for a stored procedure is defined and stored in the database itself, and then called from the application. Both of these techniques have the same effectiveness in preventing SQL injection so your organization should choose which approach makes the most sense for you.

There are also several cases where stored procedures can increase risk. For example, on MS SQL server, you have 3 main default roles: db_datareader, db_datawriter and db_owner. Before stored procedures came into use, DBA’s would give db_datareader or db_datawriter rights to the webservice’s user, depending on the requirements. However, stored procedures require execute rights, a role that is not available by default. Some setups where the user management has been centralized, but is limited to those 3 roles, cause all web apps to run under db_owner rights so stored procedures can work. Naturally, that means that if a server is breached the attacker has full rights to the database, where previously they might only have had read-access. More on this topic here. http://www.sqldbatips.com/showarticle.asp?ID=8

The following code example uses a CallableStatement, Java’s implementation of the stored procedure interface, to execute the same database query. The “sp_getAccountBalance” stored procedure would have to be predefined in the database and implement the same functionality as the query defined above.

Various parts of SQL queries aren’t legal locations for the use of bind variables, such as the names of tables or columns, and the sort order indicator (ASC or DESC). In such situations, input validation or query redesign is the most appropriate defense. For the names of tables or columns, ideally those values come from the code, and not from user parameters. But if user parameter values are used to make different for table names and column names, then the parameter values should be mapped to the legal/expected table or column names to make sure unvalidated user input doesn’t end up in the query. Please note, this is a symptom of poor design and a full re-write should be considered if time allows. Here is an example of table name validation.

The tableName can then be directly appended to the SQL query since it is now known to be one of the legal and expected values for a table name in this query. Keep in mind that generic table validation functions can lead to data loss as table names are used in queries where they are not expected.

For something simple like a sort order, it would be best if the user supplied input is converted to a boolean, and then that boolean is used to select the safe value to append to the query. This is a very standard need in dynamic query creation. For example:

Any time user input can be converted to a non-String, like a date, numeric, boolean, enumerated type, etc. before it is appended to a query, or used to select a value to append to the query, this ensures it is safe to do so.

Input validation is also recommended as a secondary defense in ALL cases, even when using bind variables as is discussed later in this article.

This technique should only be used as a last resort, when none of the above are feasible. Input validation is probably a better choice as this methodology is frail compared to other defenses and we cannot guarantee it will prevent all SQL Injection in all situations.

This technique is to escape user input before putting it in a query. It is very database specific in its implementation. It’s usually only recommended to retrofit legacy code when implementing input validation isn’t cost effective. Applications built from scratch, or applications requiring low risk tolerance should be built or re-written using parameterized queries, stored procedures, or some kind of Object Relational Mapper (ORM) that builds your queries for you.

This technique works like this. Each DBMS supports one or more character escaping schemes specific to certain kinds of queries. If you then escape all user supplied input using the proper escaping scheme for the database you are using, the DBMS will not confuse that input with SQL code written by the developer, thus avoiding any possible SQL injection vulnerabilities.

To find the javadoc specifically for the database encoders, click on the ‘Codec’ class on the left hand side. There are lots of Codecs implemented. The two Database specific codecs are OracleCodec, and MySQLCodec.

Just click on their names in the ‘All Known Implementing Classes:’ at the top of the Interface Codec page.

At this time, ESAPI currently has database encoders for:

Database encoders are forthcoming for:

If your database encoder is missing, please let us know.

If you want to build your own escaping routines, here are the escaping details for each of the databases that we have developed ESAPI Encoders for:

This information is based on the Oracle Escape character information found here: http://www.orafaq.com/wiki/SQL_FAQ#How_does_one_escape_special_characters_when_writing_SQL_queries.3F

To use an ESAPI database codec is pretty simple. An Oracle example looks something like:

So, if you had an existing Dynamic query being generated in your code that was going to Oracle that looked like this:

You would rewrite the first line to look like this:

And it would now be safe from SQL injection, regardless of the input supplied.

For maximum code readability, you could also construct your own OracleEncoder.

With this type of solution, you would need only to wrap each user-supplied parameter being passed into an ESAPI.encoder().encodeForOracle( ) call or whatever you named the call and you would be done.

The LIKE keyword allows for text scanning searches. In Oracle, the underscore ‘_’ character matches only one character, while the ampersand ‘%’ is used to match zero or more occurrences of any characters. These characters must be escaped in LIKE clause criteria. For example:

An alternative for Oracle 10g and later is to place { and } around the string to escape the entire string. However, you have to be careful that there isn’t a } character already in the string. You must search for these and if there is one, then you must replace it with }}. Otherwise that character will end the escaping early, and may introduce a vulnerability.

MySQL mode, do the following:

This information is based on the MySQL Escape character information found here: https://dev.mysql.com/doc/refman/5.7/en/string-literals.html

We have not implemented the SQL Server escaping routine yet, but the following has good pointers and links to articles describing how to prevent SQL injection attacks on SQL server

Use prepared statements and parameterized queries. These are SQL statements that are sent to and parsed by the database server separately from any parameters. This way it is impossible for an attacker to inject malicious SQL.

You basically have two options to achieve this:

PDO is the universal option. If you’re connecting to a database other than MySQL, you can refer to a driver-specific second option (e.g. pg_prepare() and pg_execute() for PostgreSQL).