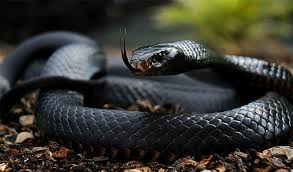 Posted By: Krish Johnsonon: November 02, 2018In: Do You Know ?Tags: black mamba, do you know, snakeNo Comments
Print Email

Black mambas are fast, nervous, lethally venomous, and when threatened, highly aggressive. They have been blamed for numerous human deaths, and African myths exaggerate their capabilities to legendary proportions. For these reasons, the black mamba is widely considered the world’s deadliest snake.

Black mambas live in the savannas and rocky hills of southern and eastern Africa. They are Africa’s longest venomous snake, reaching up to 14 feet in length, although 8.2 feet is more the average. They are also among the fastest snakes in the world, slithering at speeds of up to 12.5 miles per hour.

They get their name not from their skin color, which tends to be olive to gray, but rather from the blue-black color of the inside of their mouth, which they display when threatened.

Just two drops of potent black mamba venom can kill a human, according to South Africa’s Kruger National Park. “Like cobras and coral snakes, the venom of a black mamba contains neurotoxins,” Viernum told Live Science. She described the venom as “fast-acting.” It shuts down the nervous system and paralyzes victims, and without antivenom, the fatality rate from a black mamba bite is 100 percent. “Fatalities from black mamba bites have been documented to occur within as little as 20 minutes after injection,” said Viernum. “However, most known fatalities have occurred within 30 minutes to 3 hours or longer.”

You Should Also Read :  Income Tax Allowances and Deductions

Black mambas are shy and will almost always seek to escape when confronted. However, when cornered, these snakes will raise their heads, sometimes with a third of their body off the ground, spread their cobra-like neck-flap, open their black mouths, and hiss. If an attacker persists, the mamba will strike not once, but repeatedly, injecting large amounts of potent neuro- and cardiotoxin with each strike.

According to the University of Wisconsin-La Crosse’s BioWeb, black mambas usually mate during the spring or summer. Males fight for the affections of females. After mating, females lay between 6 to 25 eggs in a damp, warm burrow. The female leaves her eggs and never sees them again. Babies hatch about three months later and are born measuring between 16 and 24 inches.

Black mambas typically eat small mammals and birds, though according to Blue Planet Biomes, there have been reports of mambas found with whole parrots or full-grown cobras in their stomachs. In his book Black Mambas (Checkerboard, 2006), Adam G. Klein wrote that black mambas hunt by biting their prey and injecting venom, then releasing it. They then follow it until it becomes paralyzed or dies, at which point they eat it. It doesn’t usually take prey very long to die after being bitten by a black mamba. Black mambas devour their food whole. They have flexible jaws that they can dislocate in order to fit food up to four times the size of their head into their mouth.

The black mamba is one of four species of mambas, according to the Integrated Taxonomic Information System (ITIS). Others are Jameson’s mamba, eastern green mamba and western green mamba. Mambas are in the same family, Elapidae, as coral snakes and cobras. Mambas are slender, agile and active, with smooth scales and powerful venom. They all live throughout sub-Saharan Africa.

According to ITIS, the taxonomy of mambas is:

How to Sow & Grow Tomatoes at Home (in India)

Benefits of yoga and meditation

How to overcome depression?