POPULAR UTILS
Home Review Hybrid App vs Native App – Which one is better ? 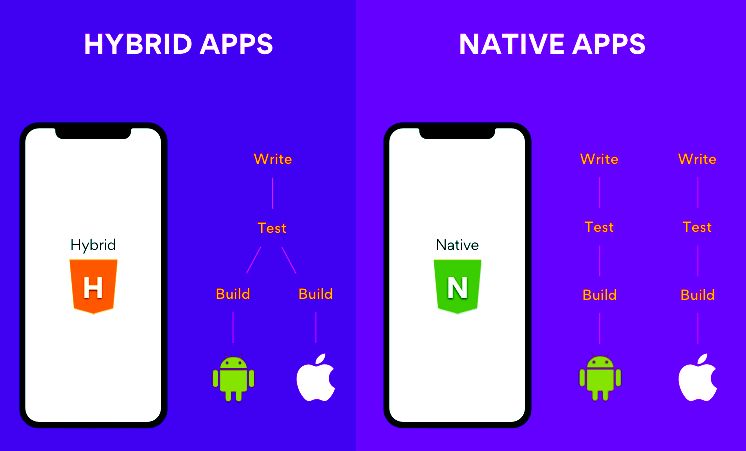 Hybrid App vs Native App – Which one is better ? most of people have this question before starting mobile app development. Mobile app development involves designing an application that will either provide information or services or entertainment. Mobile applications come in several formats. Mobile applications are either pre-installed at the manufacturing level or they are delivered at the processing level. Every application goes through a lot of pre-development considerations like screen sizes, hardware specifications, and configurations. Technical style of app development strategies are put into practice based on those considerations, your aspirations, your budget and your target demographic. To determine if you need ybrid app or native app, you need to understand each app type and what makes them different from one another.

The native app development is a process of creating apps for iOS, Windows, Android, and Blackberry on their native platform. The apps developed on native platform will work only on a particular operating system. This means the developer should create different versions of an app for different systems. The native apps provide optimized performance and they take advantage of the latest technology such as GPS.

The developers write code in Swift or Objective-C for iOS applications, Java for Android Native applications and C# for Windows. The construction of app, design, graphic styles, typography, visual effects, data entry, etc. everything varies between the operating systems. The native apps are capable of accessing the features that are present in the mobile quickly like microphone, camera, location detection, etc. They are quick to send the push notifications too. Some of the famous native apps that are available in the market are Pokémon Go, Waze, Twitter, etc. The native apps give much better user experience when compared to hybrid apps.

In Hybrid app, one app will be created for different platforms. These means be it iOS, Android, Windows or Blackberry, only one app is enough to serve all the purposes.

The hybrid apps are a combination of native apps and web apps together. A single product is enough to work on all the operating systems. These apps may look and feel like a native application, but the fact is that these apps are run by a website.

The languages that are usually used in hybrid app development are CSS, HTML5, and JavaScript. It is simply a web-based app that is put in the native app shell and connected to the device’s hardware.

These hybrid apps are cost-effective and almost all the startups and people who are on a stiff budget usually opt for hybrid app development.

The application is optimized according to the requirements of a specific platform. This way it will achieve higher marks in both speed and performance. While developing native apps, programmers consider every aspect. They make sure that the app is perfect for the specific operating system.

The native apps provide access to various inbuilt devices such as GPS, camera, calendar and some other functions of the mobile. The hybrid apps have certain limitations and it cannot access certain features of mobiles.

The developers usually have expertise in developing apps for only a project. This way if you need an app for various types of platforms, you have to get numerous developers working on them. This scenario will surely increase your budget.

Native apps require more time for development when compared to hybrid apps. Creating an app according to the requirements of one particular operating system is not easy.

Hybrid apps are very easy to develop. If you are tight on budget, then hybrid app development is the best choice for you. There is no need for you to hire multiple programmers to work on various OS platforms.

You Should Also Read :  Create a Self-Signed SSL Certificate for Apache in Ubuntu 16.04

The hybrid apps are web applications in a native nutshell. You will be able to update the content as many times as you want, and it needs very low maintenance.

The hybrid native apps don’t take a lot of your time during development. You will be able to get the app into the market in very less time.

Hybrid apps provide compatibility. But it lacks performance when you compare hybrid app with Native app. The Hybrid apps add an extra layer between source code and target mobile platform likely the hybrid mobile framework. This can result in performance loss.

The extra layer causes some big issues with the debugging too. The developers have to rely on the framework itself to work nicely on the targeted operating system without introducing any kind of bugs in the app.

For app development, you will have to remember that the user requirements and the value that this user will assign to the app will depend upon how that app makes their life better, easier, more functional, etc. When all is said and done, there’s a market requirement for all three kinds of apps whether they are Native app, Hybrid app, people need different apps for different things. Any app, even if it’s the best, most expensive app out there or vice versa will have pros and cons, things the users will like and things they’ll dislike.