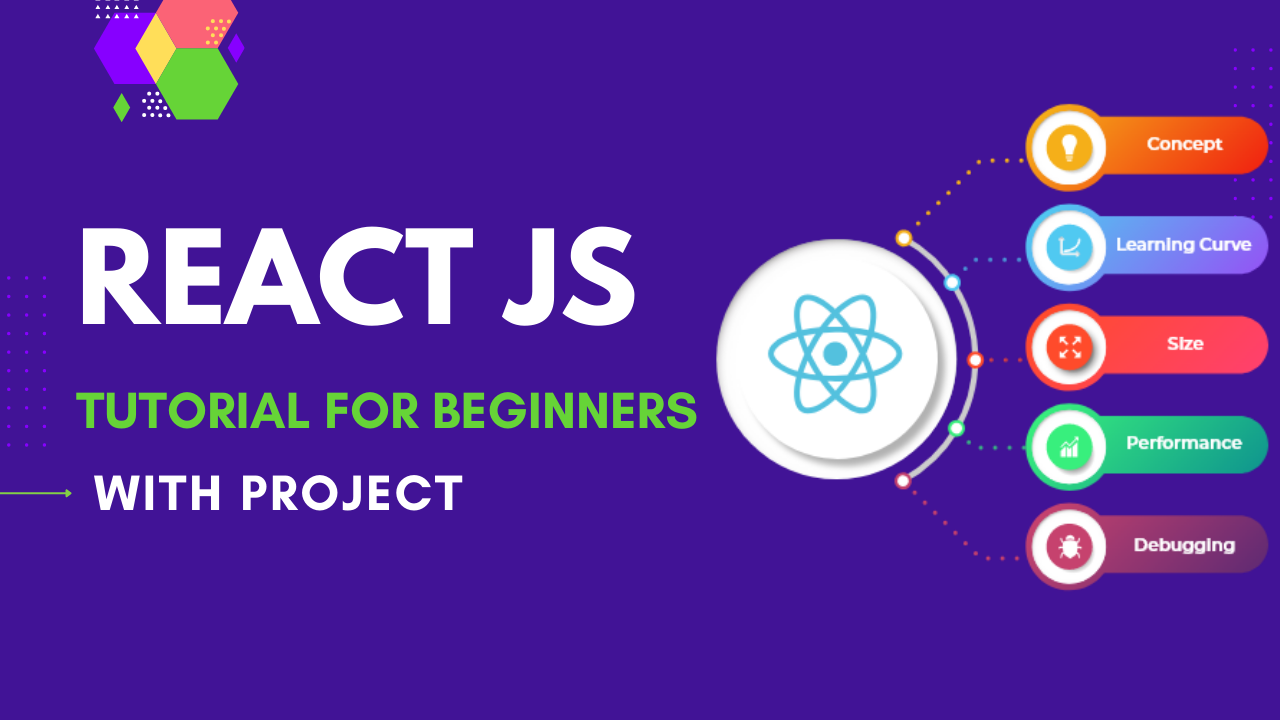 In This React Js Tutorial we will cover the basic and advanced concepts of React JS. Let us start by getting an overview of what we’ll be going through in this React JS Beginner Tutorial.

According to the official React Documentation, React is defined as A JavaScript library for building user interfaces.

React JS is one of the most widely popular open-source JavaScript libraries developed by Facebook. It is responsible for managing the view layer for both web and mobile-based applications. The primary use of React is in building reusable UI components.

React JS is user-friendly and therefore has a strong foundation and community behind it.

What is the use of ReactJS?

The main feature of ReactJS is developing a User Interface (UI) to improve application speed. The JavaScript virtual DOM, which is faster than the regular DOM, makes it possible to enhance its performance.

A ReactJS application consists of multiple components, where each is responsible for producing a small, reusable part of HTML code. You can nest these components with other ones to build complex applications with simple building blocks.

React’s component and data patterns boost readability and help handle large applications. You can make use of ReactJS on both the client, server-side, and other frameworks.

There are several JavaScript frameworks available, but React is one of the most popular ones among them. The difference between the older frameworks and React is that the former ones use a traditional data flow structure, using the DOM (Document Object Model).

But, what is DOM? A browser creates objects every time you load a web page. Data is added or removed at the back end after any modifications, and every time a new DOM is created for the same page. Hence, memory is wasted unnecessarily due to the repeated procedure, leading to reduced application performance.

To solve the above problem, Facebook invented ReactJS. Although it still follows the traditional data flow structure, it does not directly operate on the browser’s DOM (Document Object Model) but a virtual DOM instead. Therefore, it fixes any DOM changes built and run in the memory itself.

You Should Also Read :  How to Sow & Grow Stevia from Seed

Here are the cons/ drawbacks of using React JS:

There are two main ways to install the React JS.

Steps to follow to install ReactJS using the npm command are:

1. Install Node JS and NPM. They are platforms that are required to develop ReactJS applications.

4. Install Babel. It is a JavaScript transpiler and compiler that converts one source code to others.

5. Add the files—index.html, App.js, main.js, webpack.config.js, and .babelrc in your project folder.

6. Configure webpack in the webpack.config.js file.

7. App.jsx and main.js is the first React component.

9. After the installation process is complete and you set up the app, you can start the server.

10. Generate the bundle for your app. Bundling is when you follow imported files and merge them into a single file? called?a bundle.

Steps to follow to install ReactJS using the create-react-app command are:

What is React JSX?

ReactJS is a JavaScript extension. With this template script, you can use HTML and JavaScript together.

An example of a JSX code is:

Reasons to use JSX in React

In React, you can write HTML/XML structures in the same file as the JavaScript code. Then, the preprocessor converts the expressions into JavaScript code. Additionally, you can also manage the state changes in the dom in the most effective manner.

JSX tags include a tag name, attributes, and children.

Some of the reasons to use JSX in React are:

Components are the core building blocks of React applications. They are logical groups of code that make up the entire application. With the use of components, you can build UIs quickly. Every component works independently, and you can merge them into a parent component.

React components have their unique structure, methods, and APIs. Additionally, they are also reusable.

There are two types of components in ReactJS:

You Should Also Read :  Go (Golang) The Complete Guide

Given below is an example of a class component:

Props are nothing but properties you can use inside a component. They are read-only variables that store the value of attributes of a tag. Props are similar to function arguments because you can pass them to the components in a similar way as arguments.

You cannot modify props from inside the components. Instead, you can add attributes called props.

Given below is an example of moving props to a function component.

As you can see in the above example, the msg attribute is added to the <Hello/> component. You can also access it as props inside the Hello function. It will include the details of the msg attribute.

There are four phases in a component’s lifecycle. They are:

This phase is considered the birth phase in a ReactJS component’s lifecycle. In this, the component begins its way to the DOM. During this phase, the component includes both default Props and the initial State.

In the mounting phase, you create the component instance and insert it into the DOM. It has the following methods:

In this phase, you can handle the user interaction and communication with the hierarchy of components. In this phase, the priority is to make sure that the component’s latest version is displayed. Unlike the previous stages, the updating phase repeats over and over again. It includes the following methods:

You Should Also Read :  Optimize MySQL Queries for Speed and Performance

The unmounting phase is the last phase of the React component lifecycle. It is invoked in a situation when a component instance is unmounted and destroyed from the DOM. It contains only one method, as given below:

This new feature was added in React version 16.8. With the help of React Hooks, you can write the React features without using the classes. React hooks allow you to write less code and that makes your app efficient, simpler, and powerful.

useState: Most of the time in your React app you will be using this concept to store and manage the data.
useEffect: You will be using this concept in actions like HTTP requests and working with the Browser API.
useRef: This will be used to reference JSX elements.
useContext: This property of React Hooks will be used to access data from React Context to share data among components easily (instead of passing props)
useReducer: This concept in React hooks will be used to store and manage data across multiple components.
We have discussed only 5 hooks that are important to learn. There are more than 5 hooks but that’s not needed initially in your learning phase. As you will progress and you will encounter problems in your application, you will be learning more hooks slowly.

Forms are useful in web applications as they make it possible for the users to interact with the application. They can perform various tasks such as adding users, searching, filtering, ordering, booking, etc. Forms can contain elements such as text fields, buttons, radio buttons, checkboxes, etc.

In ReactJS, the component handles the React form. There are two different types of forms:

Events are actions that are triggered by either system-generated events or user actions. A few examples of events are loading a web page, resizing a window, pressing keys, etc.

React’s event handling system is called synthetic events and is similar to the system on DOM elements.

You can use the setState() method to update the state during user interaction with an HTML element.