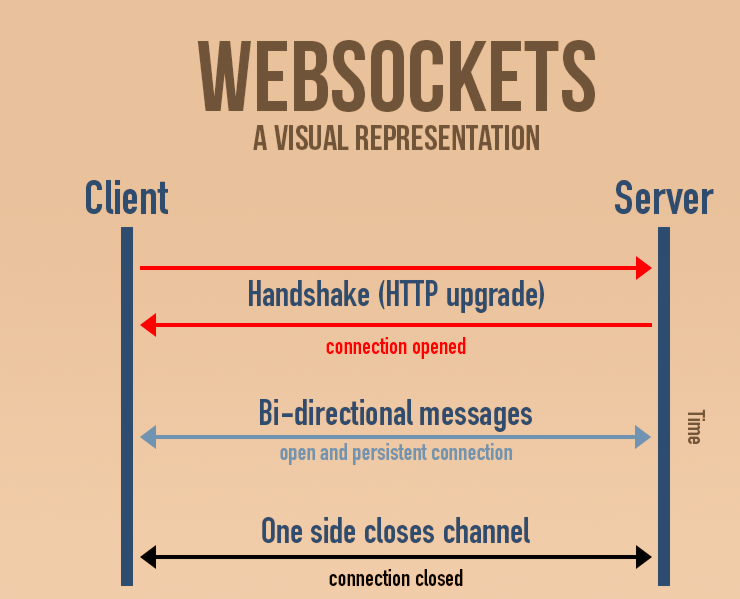 WebSocket is an amazingly fast, easy to use and full-duplex way to communicate between client and server. WebSocket is recommended if you want a fast real-time application like a bid application, or a real time poker game. It’s easy to broadcast messages between users.

WebSocket is a protocol for creating a fast two-way channel between a web browser and a server. WebSocket overcomes limitations with HTTP to allow for low latency communications between a user and a web service.

WebSockets adds flavor to the web by allowing websites to update content without having to wait for the user. Unlike other techniques which piggyback on the HTTP protocol, the WebSocket protocol creates a true ongoing connection between the user and the web service, allowing information to flow easily between both endpoints.

WebSocket was first seen in HTML5 specifications as TCPConnection, a place holder for a TCP-based socket API. The protocol was developed by Ian Hickson and Michael Carter and standardized by the IETF in RFC 6455 in 2011. WebSocket is supported by almost all major web browsers including Firefox, Chrome, Opera, Edge and Internet Explorer.

A WebSocket connection is initiated by sending a WebSocket handshake request from a browser’s HTTP connection to a server to upgrade the connection. Along with the upgrade request header, the handshake request includes a 64-bit Sec-WebSocket-Key header. The server responds with a hash of the key in a Sec-Websocket-Auth header. This header exchange prevents a caching proxy from resending previous WebSocket exchanges.

From that point, the connection is binary and does not conform to HTTP protocol. A server application is aware of all WebSocket connections and can communicate with each one individually. As WebSocket remains open, either the server or the user can send messages at any time until one of them closes the session. The communication can be initiated at either end, which makes event-driven web programming possible. In contrast, standard HTTP allows only users to request new data.

WebSocket Compared to Other Technologies

Asynchronous JavaScript and XML (AJAX) is a technique for updating the contents of a page without refreshing the entire page. Rather than interrupt the user’s session, AJAX modifies part of the web page as it appears in the user’s browser. The browser can communicate any changes to and from the server without having to reload the entire page.

The drawback to AJAX is that it’s still a one-way communication. The server can’t push data to the user. Instead, the user has to poll the server for changes. Additionally, since AJAX works over HTTP, a new connection has to be created each time an AJAX request is made.

WebSockets overcomes both of these limitations by establishing a persistent connection that the server can push data over.

Webhooks allow a web service to send data to another service when a particular event occurs. They make it possible for services to instantly communicate with each other, allowing those services to process and respond to events as they happen. Unlike AJAX, Webhooks are entirely server-side and don’t interact with the user’s experience.

You Should Also Read :  Error Configuration 'compile' is obsolete and has been replaced with 'implementation'.

WebSockets can facilitate two-way communication between a user and a service, recognizing events and displaying them to the user as they occur.